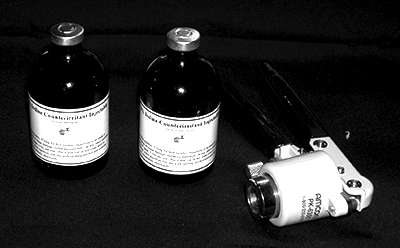 A 2% iodine in oil counter-irritant injectable had before the FDA stepped in during the  mid-1980’s been a very useful formulation for treating sore horses suffering from strained muscles, ligaments and tendons.  Some of  the commercial brands back  then were Hypoderim (also contained ether) and McKay’s Maxliin.  Now in the 21st century, only a few old timers will even know of this treatment or ever have actually witnessed it.   Plus since the FDA suppression back in the 1980’s,  it has become very hard to obtain  a 2% iodine in almond oil formulation.  Before the mid-1980s, it could have been purchased over-the-counter at many tack shops.  I would go into my trackside tack shop and purchase McKay’s  by the case without a prescription.  Now, the only way is to have your vet write a prescription to a compounding pharmacy that specializes in equine remedies and then hope they know what they are doing which may be a bit too hopeful in this world  of less and less equine knowledge.

Below  is a YouTube video of a thought-to-be promising race prospect Thoroughbred in Argentina that was purchased very sore in late  2014.  He  could hardly walk out of his stall being so lame in his shoulder, nor could he be mounted. The vet thought the old fashion technique of  injecting his shoulder with a 2% iodine in almond oil was the answer, but this formulation is very hard to come by in these post-1980’s times.  Only a few compounding pharmacies specialize in formulating this  injectable. Owner  came to me and I  sent two vials of the above 2% to Argentina  for his treatment.  Vet injected horse twice  in January with a successful outcome.   He raced on April 19, 2015  in a 1000 meter  Handicap as seen below which was his first start back since racing two years ago.  The treated horse went a very spectacular come-from-behind performance going way wide on the last turn.  He is the # 3  horse coming in second.